The Civic Committee purchased a tree for the Naperville Park District to commemorate our 90th anniversary. A Swamp White Oak was planted in Central Park in the Spring of 2019. A plaque accompanies the oak recognizing the Club’s 90 years, 1929-2019. Another swamp oak was planted in 2021 at the 95th Naperville Library campus 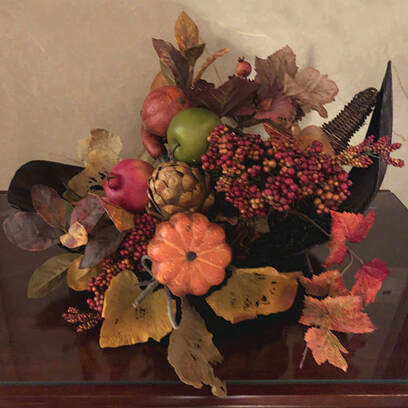 A 2019 Floral Arrangment for NCTV (Photograph © 2019 by Gwenn Lloyd)
Awarding scholarships continues to provide financial assistance to graduating high school seniors and college students in the Naperville area whose studies are concentrated in the conservation, horticulture or environmental sciences. The program, which began in 1978, has awarded $307,050 as of August 2022. The Club also donates to the Garden Clubs of Illinois Scholarship Fund. Furthermore, the Club offers two $25 awards plus a certificate on the state level to the clubs that give the most money per member to scholarships.

For many years the Club exhibited flower arrangements at a local library. Since 2018, the Club instead has a new community exhibit site, the Ronald McDonald Family Room at Edward Hospital. Each week a Club member delivers a floral exhibit to brighten the atmosphere. 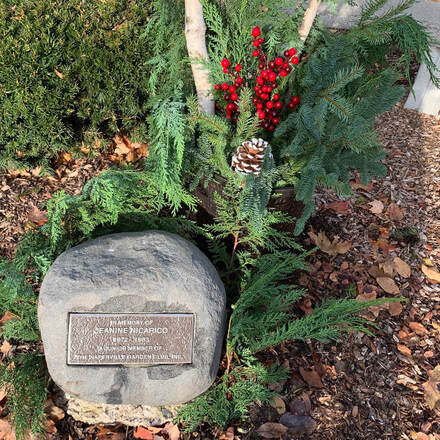 The Jeanine Nicarico Memorial Garden at Elmwood School (Photograph © 2019 by Candace Pastore)
A monthly floral arrangement is also given to Naperville Community Television, Channel 17’s “Spotlight on Naperville.” In 2018, the Club’s partnership with NCTV-17 expanded to provide set pieces for the quarterly taping of the Naperville Mom’s Network show. A club member is also featured seasonally during the station’s 630 Lifestyle segment.

The Civic Committee, in honor of Arbor Day, continues to make donations to purchase trees for the Naperville community. We also continue our community presence at schools, parks, and libraries. For example, the Jeanine Nicarico Memorial Garden at Elmwood School; the Blue Star Memorial Marker and “Spirit of the Navy” statue at Burlington Square Park; the Mary Quilty and Marie Mackenzie Memorial Garden at North Central College; and plant and tree donations to Naperville Libraries.
Classes are offered to members, the public and other organizations. Club members teach floral design and other skills of interest to members. This helps others to recreate the designs seen during Cup of Cheer™.
The Club’s Membership Scholarship Program continues to encourage education and provide partial reimbursement for members attending National Garden Clubs Environmental, Flower Show, Gardening, or Landscape Design Schools.

Grocery donations for the Loaves and Fishes Community Pantry continue on a monthly basis. Thousands of pounds of groceries and dollars have been collected and donated to the food pantry serving DuPage County.
The community partnership with The Growing Place continues. The garden center and nursery has helped with staging past Club flower shows with plant materials. They are also a ticket sale vendor for the Club’s major fundraiser the Cup of Cheer™. 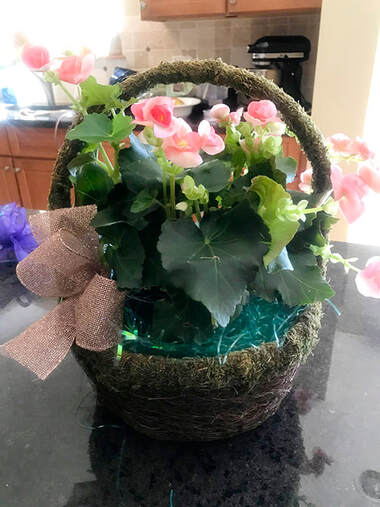 A 2019 display for the Ronald McDonald Family Room (Photograph © 2019 by Bernice Shaffer)
North Central College is the Club’s longest community partner beginning in the 1960s. For many years it had provided space for the Cup of Cheer’s™ Holiday Market and Tea. The Club also funds a scholarship in the memory of two members with the College choosing the recipient(s.)

Through collaboration between the City of Naperville, the Conservation Foundation and our Club, a Pollination Station was established at the Naperville Municipal Center. The pollinator garden is filled with flowering native plants that support butterflies and other pollinators. The area will be used to promote awareness about native plants and to inspire residents and businesses to use them in their landscapes.


The Club is also grateful to members who, on their own, support garden and horticulture projects throughout the community and practice environmental responsibility in their own gardens.